There is an amazing BBC series Connections by a famous science historian James Burke. The films explore how various discoveries, scientific achievements, and historical world events have linked together over the centuries to bring about particular aspects of modern technology. The series (40 films in total) are the most delightful and accessible approach to the history of the world and its' sciences since the Cosmos series.

Then I was researching information about the Connections series online and accidentally stumbled on a link to KnowledgeWeb. I was amazed to learn that such project already exist, because I dreamed about something like it for a long time. I am extremely interested in the development of science and technology (goes in the family, my father's doctoral thesis was done in this field) and was envisioning a tool similar to K-Web for a long time. Now I found it. :) Have to find whether it's actually useful (i.e. if custom content can be added there).

From custom manufacturing to universal assemblers

Using custom manufacturing a Wired journalist with no design experience designed his own an electric guitar in eMachineShop and had the parts printed to spec.

Gershenfeld, director of MIT's Center for Bits and Atoms, makes a reasonably good case that soon every house will have its own personal fabricator. He has already taken an important step - he has shrunk the personal fabricator down to a single room's worth of off-the-shelf tools, all of which are available right now.

Custom manufacturing in a fabrication lab -

The CBA fabrication labs are already used to produce peculiar one-off individualised devices, such as GPS-enabled tags for sheeps, electrode-driven device to measure the fat content of milk, motion-detector security system to protect a personal diary.

OK, that doesn't actually sound too far-fetched, but would quickly make the fabricators ubiquitous and extremely useful.

Now you have a nanofactory (vision, 60Mb video). This is already functional nanotechnology and will set off the final stage of the revolution (super-exponential computing power growth and the singularity).

Finally, we have a nanoassembler. 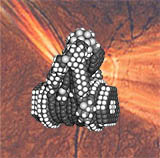 We have a unversal self-reproducing nanoassembler. Finally an end to material scarcity. This would signify final liberation of the man and the control of mind over matter. This is a posthuman level, where turning all dumb matter into smart matter is finally possible. 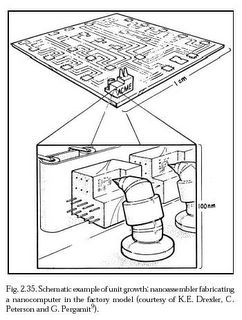 Edit this text at Future wiki

site of a genuine looking company (in Russia) that provides fake diplomas and other papers of all kinds. Looks extremely professional and reliable (as far as you can judge it from their site). Call +7 (901) 372-31-14 to order anything from fake diplomas (registered in university's archives) to a passport (domestic or foreign) to Council of the Federation (Russian Senate) Member's certificate.

That's neat. The only hope for preservation of privacy and freedom from totalitarian government surveillance may come from professional criminals (as one can also see from countless sci-fi movies such as Johnny Mnemonic, etc.).