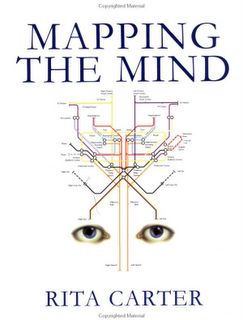 Mapping the Mind cover
the precept inscribed in gold letter upon the temple of the Oracle of Delphi. The authorship of this famous maxim was ascribed to every great Greek philosopher, from Pythagoras to Socrates. According to Juvenal, this precept descended from heaven. It is immensely strange, then, that most people, including you, my dear reader, never really make the effort to 'know thyself.' The number of misconceptions, superstitions and myths that we spread about ourselves is indeed astonishing. Fortunately for you, someone else has already taken the time to understand you and present the results in entertaining, easily digestible, but at the same time scientifically rigorous format. Let me introduce Mapping the Mind by Rita Carter, an illustrated user manual to the software that runs inside our skulls -- the human mind.

Rita Carter is a British medical writer. She was twice awarded the Medical Journalists' Association prize for outstanding contribution to medical journalism. The book gives a comprehensive description of our knowledge about the brain (as of 1998, when the book was written). It covers popular topics, such as the causes for optical illusions, the nature of the Mona Lisa's smile, the differences between the left and the right brain, between males and females, the mechanisms of drug addictions. It also delves into less popular subjects, such as the need for rationalization, the mechanisms of speech and reading, the "programmability" of patients with a lobotomy, the causes of face-blindness and many others. In fact, after finishing the book I can hardly name any aspect of the mind that the book didn't tell me about.

Throughout the book, Carter's descriptions invariably remain strict, rigorous and factual. The book doesn't make any empty claims about our minds, nor does it delve into controversies perpetrated by the uninformed. Everything written is always based on pure hard science, with references aplenty.

This doesn't prevent the book from being easy to read and immensely entertaining. Imagine the weirdness of thousands of clinical histories condensed into 330 pages for our education. The simplest way to understand the function of some part of the brain is to find a person in whom it is damaged. Here you have it all: A man who believed that copulating with the pavement was normal; the famous man who mistook his wife for a hat; Vladimir Nabokov and his account of synaesthesia; people with Fregoli's syndrome (who constantly mistake strangers for people they know, even though they realize they look totally different); chickens excited by Pink Floyd's "The Final Cut"; Nadean Cool, her false memories of baby-eating Satanic cults and her 120 different personalities, including a duck; and people with anosognosia, who refuse to realize their illnesses, such as blindness or paralysis. And what's even better, you will be able to find explanations for your own quirks and deficiencies. There are bugs in every program; your mind is no exception. It is an amazing feeling to be able to realize how your mind works, what makes you tick, what constitutes "you" -- why you feel, think and act the way you do.

The book is a treat for the eyes: the huge number of helpful, pretty illustrations makes it both easier to comprehend it and more pleasant to read. The numerous diagrams and brain scans illustrate every subject, showing which areas become more active when you have depression, which areas cause OCD (caudate), what causes eating disorders (faults in hypothalamus), the pathways activated during face recognition, etc. This helps dispel the illusion of our brain being an incomprehensible black box, letting you get a grip on the physical basis for thoughts. It's like ignoring the EULAs and looking at the source code for your mind for the first time.

The book consists of eight chapters. It begins with an introduction to the brain structure in "The Emerging Landscape," starting with an overview of the misconceptions of phrenology, and ending with a short comment by a neurophysiologist Horace Barlow, who explains the usefulness of a reductionist approach as a first step to studying the brain. The section covers all brain modules, the neural pathways and explains the evolution of the brain.

After we are through the basics, our journey around the brain starts. First, in the "The Great Divide," Carter explains the roles of the left and the right hemispheres and the corpus calossum -- the connection between them. Among other things Carter explains the alien hand phenomena, describes experiments that demonstrate that people whose corpus calossum have been severed exhibit two separate personalities, and touches the puzzle of left-handedness.

After that, we delve deep into the brain, into its more primitive part, the limbic system, which is responsible for our emotions. Then we are shown the nature of perceptions and how they achieve their meanings. After that the author breaks from the confines of the brain and explains the social nature of humans, and how language enables most of our social interactions.

Then Carter describes the nature of our memories. She explains amnesia and Alzheimer's disease, explains the amount of memory we have, and where different memories (such as procedural memory, fearful experiences, or normal memories) are stored. She describes H.M., a patient with most of the hippocampus and amygdala removed. His mind had no continuity at all; H.M. lost the ability to form most types of new memories, but he could form procedural memories and could learn some new music to play on the piano. Another man, after having a minor stroke in the middle of a family dinner, suddenly found that he didn't remember where he was, and no longer recognized the people at the table. He didn't do anything, though, and later told the doctor: "I felt quite happy being with them even though I didn't know who they were," and "they seemed rather an agreeable lot." We are shown why false memories are the norm, rather than an anomaly.

Finally, our most unique and advanced feature -- consciousness -- is explained. Carter describes the "working memory" model developed by Alan Baddeley, where images and speech-based information is held for short time in a cache-like space, while the "central executive" part co-ordinates the information processing. She demonstrates how complex programs can be easily triggered in patients with lobotomy. French neurologist Francois L'Hermitte once invited two of his patients, a man and a woman, to his home. He ushered the man into a bedroom without explanation. In the middle of the day the man saw the ready-to-use bed and immediately undressed, preparing to go to sleep. When a woman was let in and saw the rumpled bed, she immediately started to make it. Carter explains the illusion of the free will and its evolutionary origins.

She ends the book with the optimistic conclusion: "I believe one thing is already clear: there is no ghost in this place, no monsters in the depths, no lands ruled by dragons. What today's mind voyagers are discovering is instead a biological system of awe-inspiring complexity. There is no need for us to satisfy our sense of wonder by conjuring phantoms -- the world within our heads is more marvelous than anything we can dream up."

What does this book leaves the reader afterwards? It left me with the insatiable desire to immediately read it again, this time with a notebook and a pencil at hand, so that I do not miss a single fact, a single lesson, a single bit of truth about who I am. To me the book was perfect -- a unique combination of scientific rigor and entertaining writing. Each amusing medical account was always accompanied with a detailed explanation of the physiological basis for it and a handy illustration. It was complete, well-structured and accessible.

I think it was the best book (fiction or non-fiction) that I read in the past year. The only other book that approached it was another take on the nature of the mind - the amusing Permutation City by Greg Egan, which takes the technologically feasible idea of mind uploading and pushes it to its limits, exploring the philosophical and mathematical consequences along the way.

You can browse the book at Google Print or at Amazon. Please do so and then read it in full. Learning about yourself should be the top thing on your agenda, if you consider yourself an intelligent creature. And for a computer scientist or a programmer there can hardly be a more interesting subject than the most complex software application, written over the millions of years, an amalgamation of legacy features, sloppy code, perfectly optimized routines, special cases and the ever-harmful neural goto operators. "Gnothi seauton," and have fun doing it.